This all started with the sort of phone call that an artist might fantasise about, but which rarely happens: “Would you be able to make us a reasonable sculpture for £50,000?”

This call was out of the blue and thinking it was probably a hoax I nearly didn’t follow it up. As it turned out, it was the lovely Aaron Wright from David Wilson and Barratt Homes, who had seen my work ‘The Hunters’ in the Bordon Inclosure and thought that I could make a piece for the Parade Square: a high spec residential development surrounding a huge open formal space that was once used to train the cavalry from the barracks in Bordon.

A horse was the obvious choice, though an unoriginal one perhaps, it fulfilled the need for a natural, powerful and magnetic focal point in an otherwise uncentered and somewhat sterile setting. It would also provide an appropriately commemorative element as a feature of our military history.

Richard Weaver and I were very excited at the prospect of making an entirely ‘hand-made’ job of this life-size horse, whose budget by this time was cut by a third, and therefore even more of a challenge. We realised that we couldn’t afford to use mainly copper, as the initial model intended, or have a figure of a groom, and that the body would have to be forged but that the head could be cast with the more affordable and manipulable bronze resin.

One of the main issues then became how to integrate the contrasting method and material of the head with the ironwork of the body, both visually and technologically. We both arrived at a design concept of a profoundly organic principle, which was to ‘grow’ the horse from four apple trees straight out of the ground (Blackmoor is also famed for its apple orchards). We did plant several real apple trees around the horse when we finally installed the piece in January 2020, hoping that one day in the future local children would be able to pick these apples and hold them under the horse’s mouth.

The design idea deeply challenged Richard’s need for an accurate spec to follow with his weighty processes in metal and equally challenged my much more random and intuitive way of working, which one can get away with in an image in two dimensions but not so much in more permanent materials. Somehow we achieved a completely mutually agreed solution, after a great deal of machination and trials.

At one point, watching him mending an old hand mill to do something tricky, I said “My unspoken family motto must be similar to yours, ‘Do it the hard way!’” he replied “Ours was ‘Do it the hard way twice!’” … but in the end it worked.

From start to finish this project went on for two years, with lots of adjusting and redesigning. The actual making took a year, and included the construction of a life-size iron work armature cage.

I started with photographing and drawing ‘Ollie’, a magnificent horse kept in local stables, and he matched our images of a typical powerful cavalry horse trained to go to war, where so many of those beautiful creatures tragically perished. As I commenced the modelling of the head in clay however, the character of the horse changed to a somewhat more feminine and much slighter figure , which I began to think of as ‘Olivia’.

At this time, Richard’s busy workshop was undergoing an age of enlightenment concerning gender issues, so in the end our horse’s name evolved into simply ‘O’, or ‘The Wonderful O’ (as in James Thurber’s famous fable). It was also important to me that the head was as real to people as possible, in a way that would attract the hands to her mouth in affection. With this in mind I chose to put in the glass marble eyes which give a life-like effect.

I am deeply grateful to Richard Weaver for his unending patience, calm and enthusiasm, as well as his extraordinary talent for design and skills in engineering, and for collaborating with me in this fantastic adventure, which has been, without doubt, the most challenging and most exciting thing I’ve ever made. 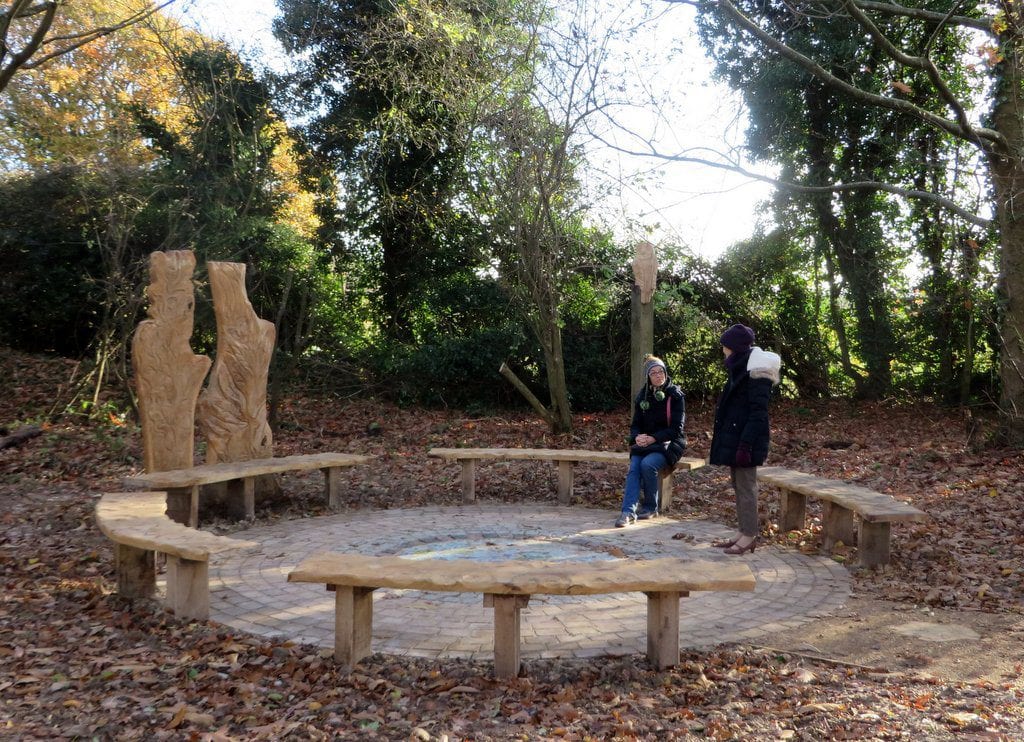 Greatham Primary School won some money from the Tesco Save the Bag Campaign and wanted to bring back their wild life area into a state fit for the children to interact with.
They asked for creative and practical installations so I made an Oak Leaf Copper Bird Bath, with a great deal of generous and expert help from Steve Myburg. 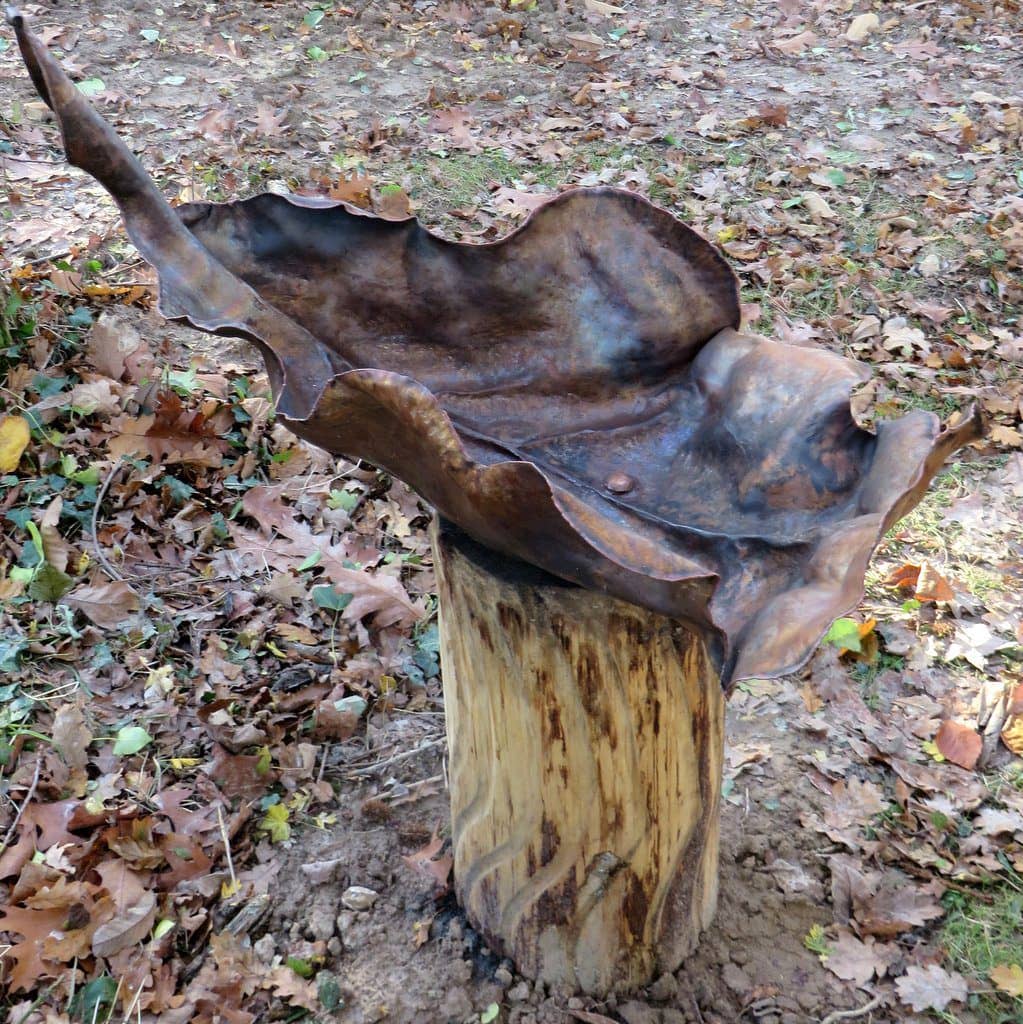 A circle of carved oak benching with throne backs honouring the Ash Queen and the Oak King. 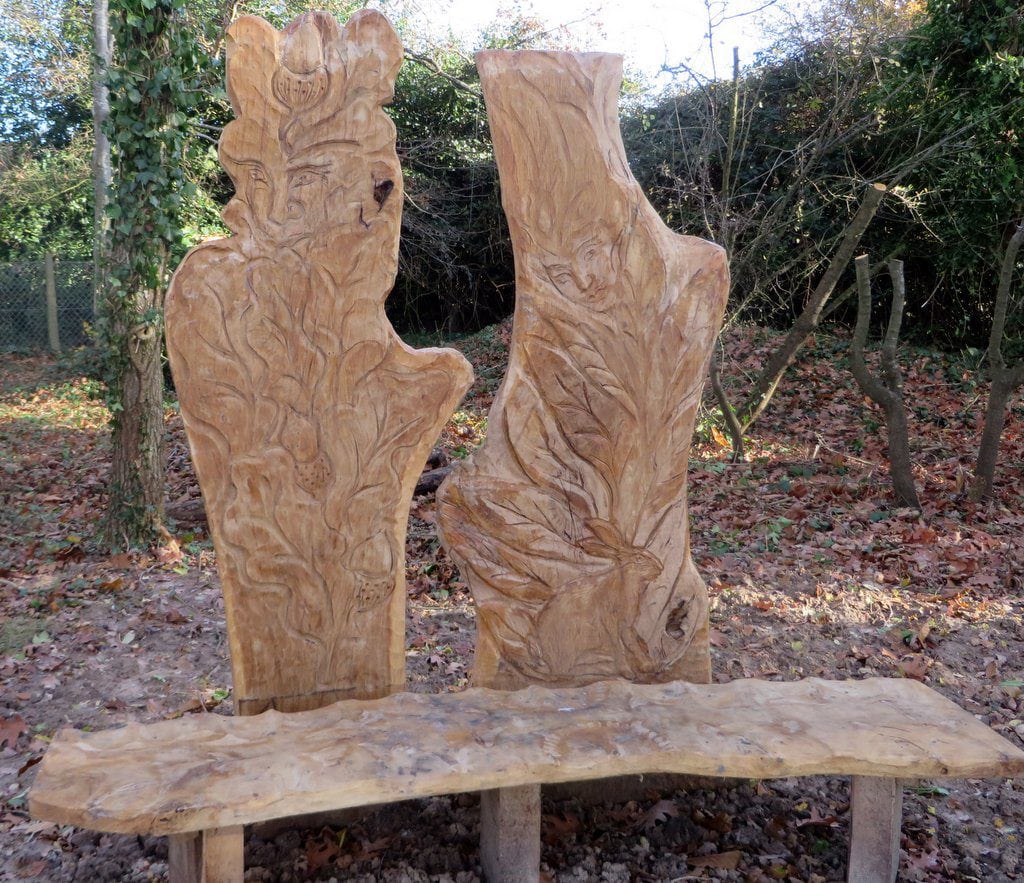 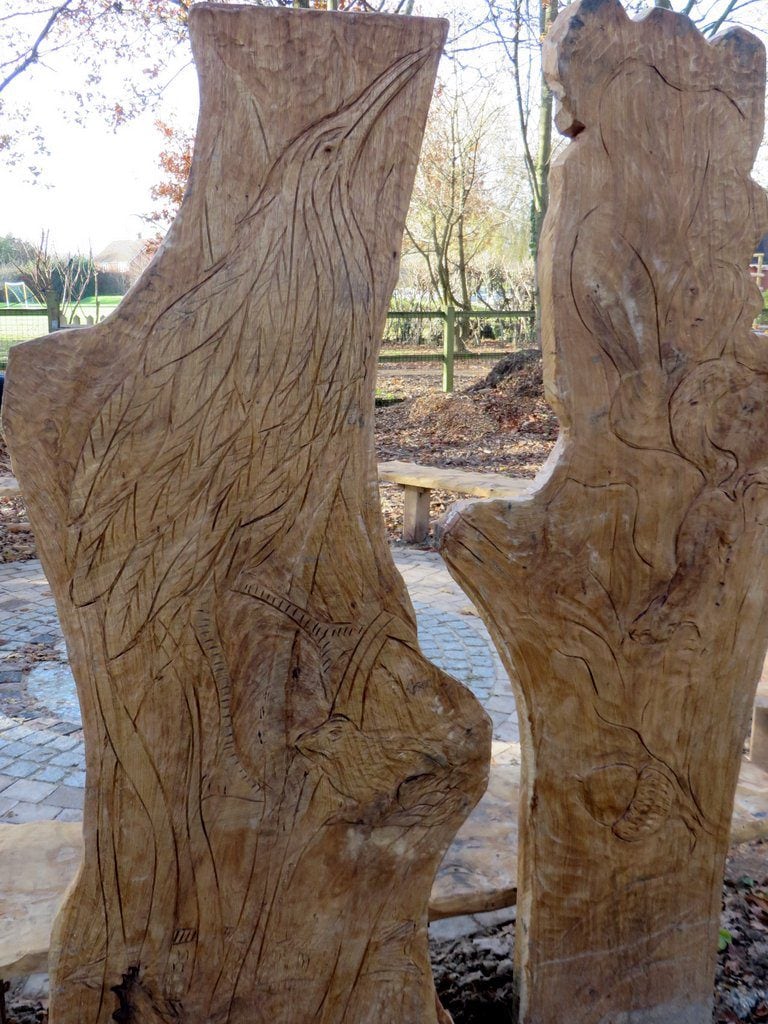 I commissioned Joel Andreus to carve five owls to preside over the area. The children named all five on their first visit. 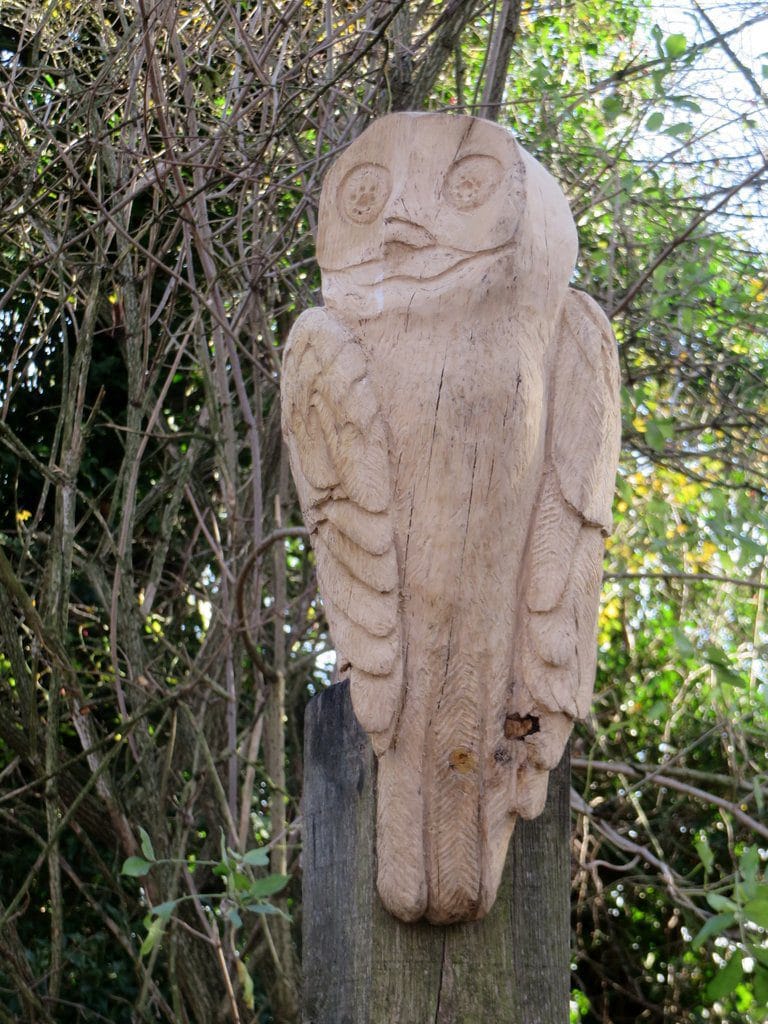 For the second stage  I have made a squirrel and rat proof bird table from recycled copper tanks and some decorated benches to go in their new hide. 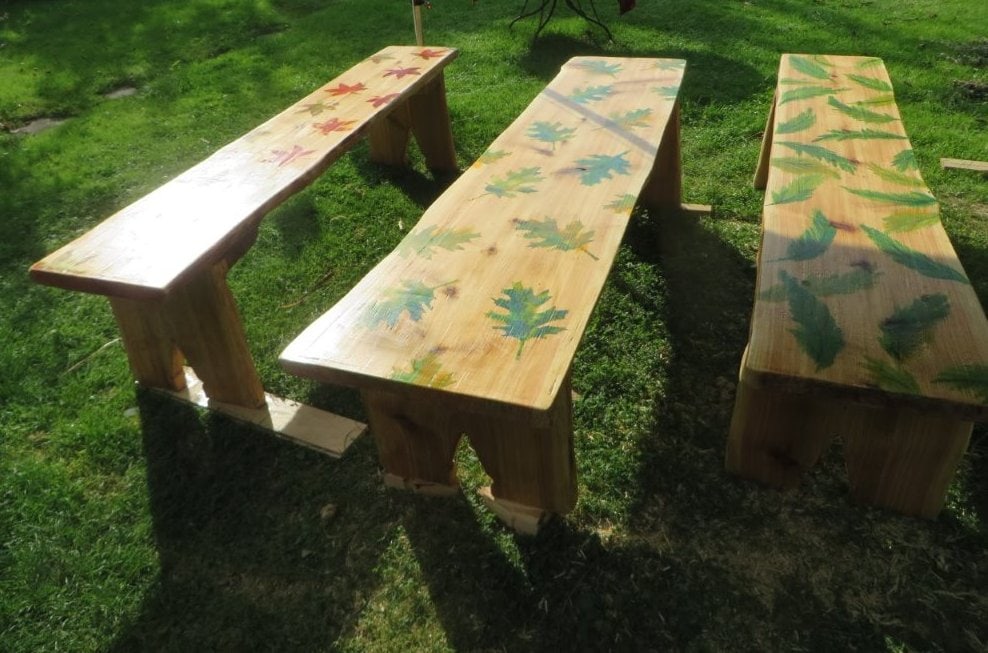 This was an exciting and pioneering project to create a new community woodland area, a Suitable Alternative Natural Greenspace (SANG) in the middle of the new residential zone in order to attract local dog walkers away from the more sensitive SSSIs such as Broxhead common.

My brief was to create artistic features that sustained the interest of residents who might use the wood on a daily basis and to work with a landscape group to integrate the designs into a network of pathways and open spaces throughout a diverse 24 acres of mixed woodland that borders the River Wey.

These are two hunters pointing at their quarry of a deer through the trees. They are constructed on steel armatures and covered in beaten steel laser-cut fern leaves. These have been left to rust until they are the colour of bracken and then treated with Owatrol to give them a lustre.

This was a major undertaking and I am hugely grateful to Richard Weaver for the crash course in metal-work and enormous generosity of his time and resources that made this sculpture possible. I had such a lot of fun making these pieces! 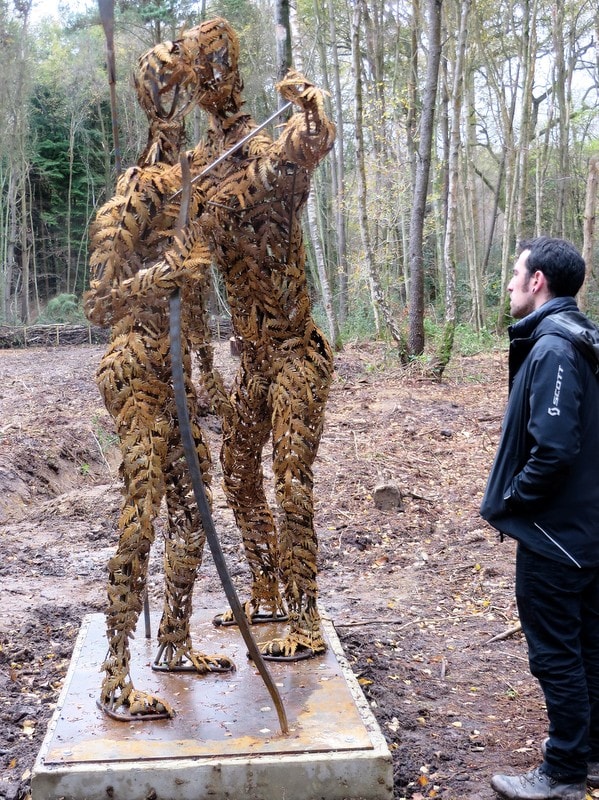 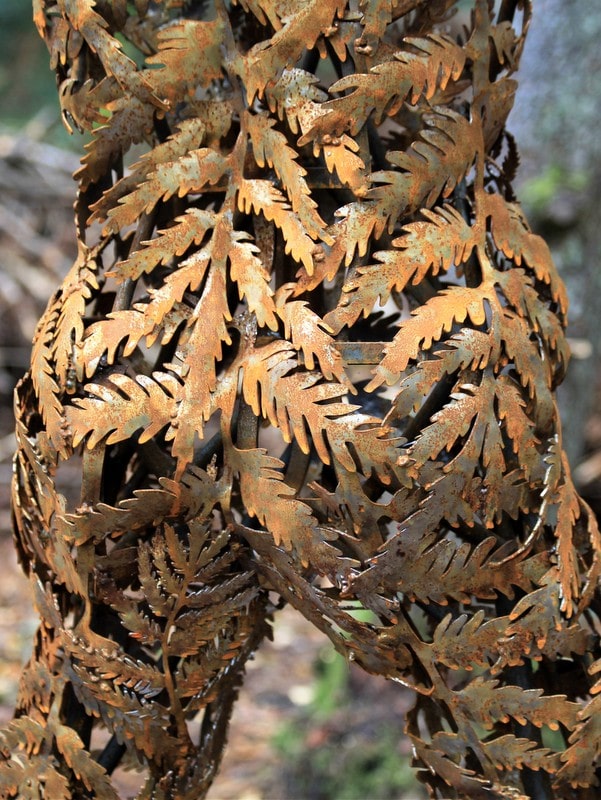 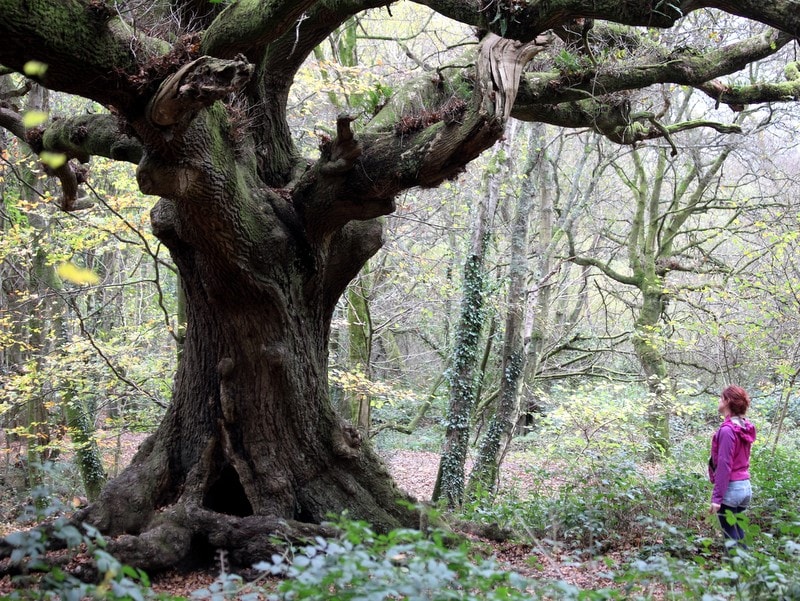 This is a piece that celebrates and enjoys the major natural feature of this curious woodland, the King Oak right in its heart. It is 450 years old and in every way a magical tree and much loved by local people.

The seat is positioned so that they can comfortably appreciate the Oak from just beneath the nearby yew trees. This has been a popular feature so far. It was made by Phil Walker, local tree- surgeon and sculptor and Joel Andreus, also a tree-man and carver. 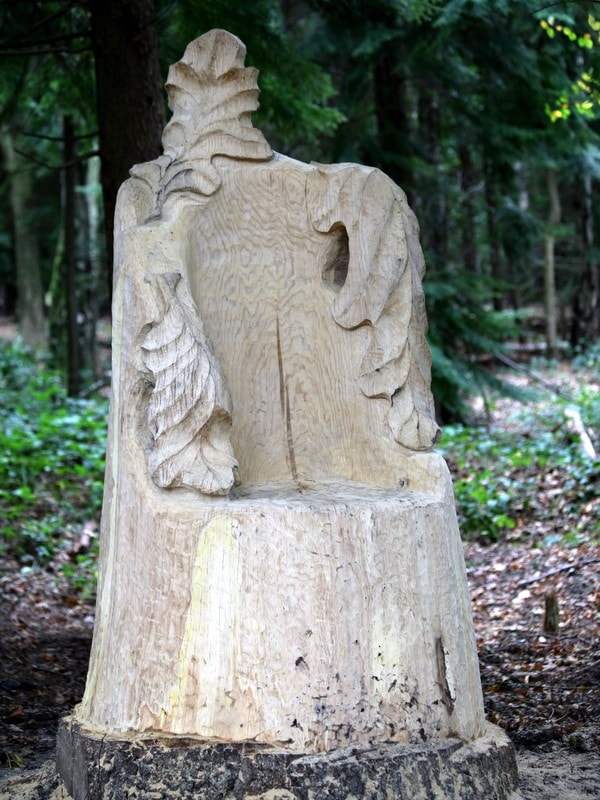 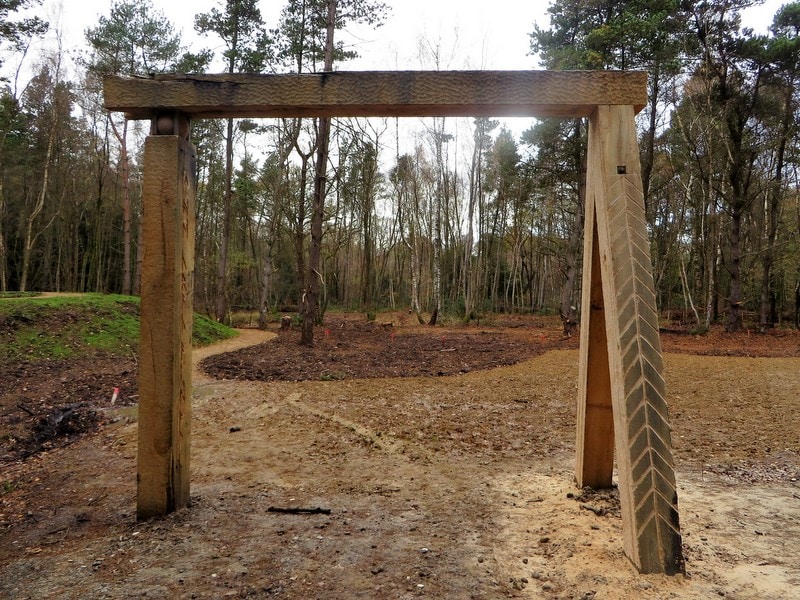 This was another huge mission, mainly because oak with the dimensions needed turned out to be very difficult to find. After nearly giving up looking, there was a storm that blew down two oaks on the farm behind the house and one of them provided the timber for these long lengths.

I worked them with my new Holey Galahad tungsten tipped ‘doughnut’ and added runes that say “The Crack of Dawn”, a not so private joke between “Irish” and me, but this can be decoded by visitors when the 9 foot table with the key on it is installed nearby.

The surface is stained with ochre and lime and the top joint holds in place a stone ball.

This was the first piece I completed and was inspired by the enthusiasm of Paul, our chief landscape architect, who kept urging us to look up at the tree canopy to admire the larch tops in winter.

They are constructed with mirror steel onto creosoted ply layers and inspired by the many examples of bracket fungus on the trees in this wood.

In the  bend of the river is a perfect spot to quietly contemplate the meandering flow. An angled bench backed by a willow screen provides  two-way privacy and suspended over the water in the alders are two willow coracle frames.

These are the only two deliberately ephemeral features and are meant to gently disintegrate in time. 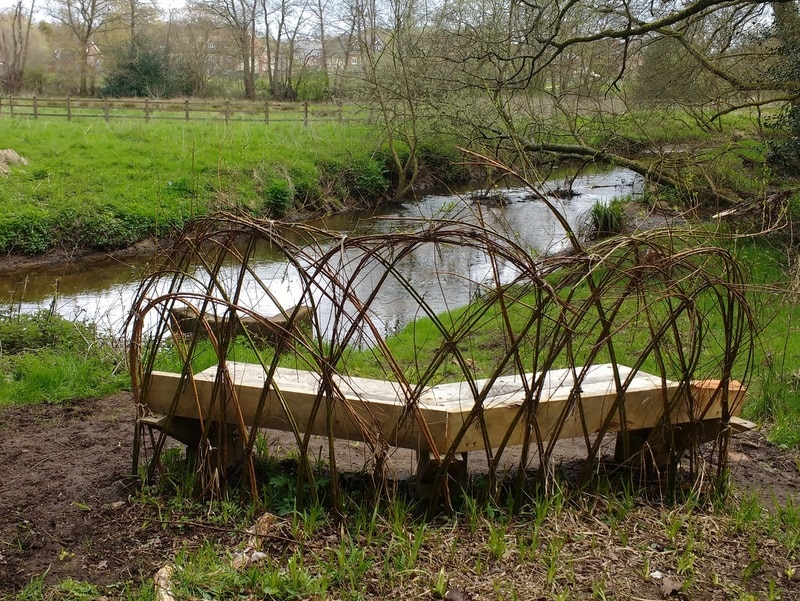 The coolest place to be in Vittorio Veneto in June is almost certainly in the studio of Proffessorio Alma Ortolan, not just because the temperature outside is well into the nineties, but because she is  a leading expert in the making and conservation of the ancient and mysterious art of making Frescoes.

The heat flows languidly through the fourteenth century cobbled streets wafting the heavy fragrance of jasmine and roses over the castellated walls and the business of this old part of the town, subsides into an afternoon siesta.

Venice is an hour to the east and the magnificent Dolomite mountains create a stunning backdrop to the north, which send us cooler air later in the evenings.

In the studio the ever present sour dampness of the fresh plaster we have laid, with painstaking application, to the terracotta tiles is slowly drying. We have been taking the tiles outside to dry against the Gothic arches along the street of this beautifully restored town house below the castle walls.

The art of making frescoes is an alchemy of elemental ingredients and processes. Few painters practice this laborious technique in these more immediate times, but there is still a raw power in using the earth pigments on the freshly laid plaster, making a permanent and lasting image that goes on deepening and brightening over the centuries, due to its mysterious chemistry. 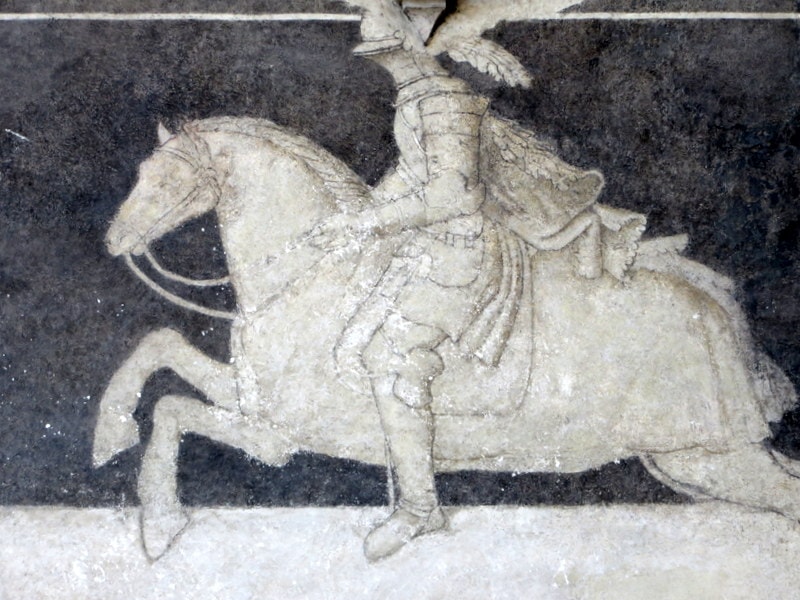 With Alma’s experienced help I learn a lot more about the way in which the ancient Roman painters worked by practising on some terracotta engineering tiles. The secret of good fresco is a well laid and balanced arrechrio layer beneath a very thin layer of damp intonnaco. We spend hours mixing a blend of fine and varied aggregates with mature lime putty in a builders mini cement mixer, adding an egg for good measure, and of course its emulsion properties.

At last we have a surface that satisfies Alma’s perfectionist eye, and she coos lovingly over it. But before we can lay anything else on it we have to go up for lunch. Alma’s mother, Leonora is a marvellous Italian cook and as well as running the B & B side of things, still unstoppable at seventy, indulges  guests with dishes fresh from the garden and local chilled prosecco. I was in Heaven over one of my favourites, in common with the Doge of Venice apparently,  Rissotto Milanese; made with fresh peas and parmesan. We are joined by one of Alma’s illustrious friends, Alessandro, who is a well known sculptor. He has brought a copy of the journal that describes the special research that Alma is also so well known for, the restoring of some early Christian frescoes beneath the second largest church in the Vatican. There is a photograph of her meeting with first Lady of Azerbyjan and the cardinal in charge of the Catholic Church’s cultural collection. We discuss the haunting nature of the atmosphere in these catacombs with some awe. 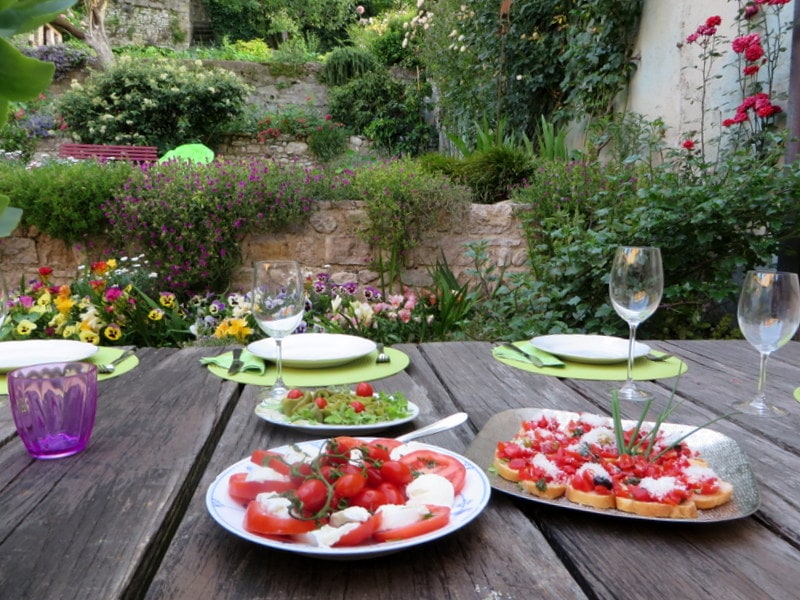 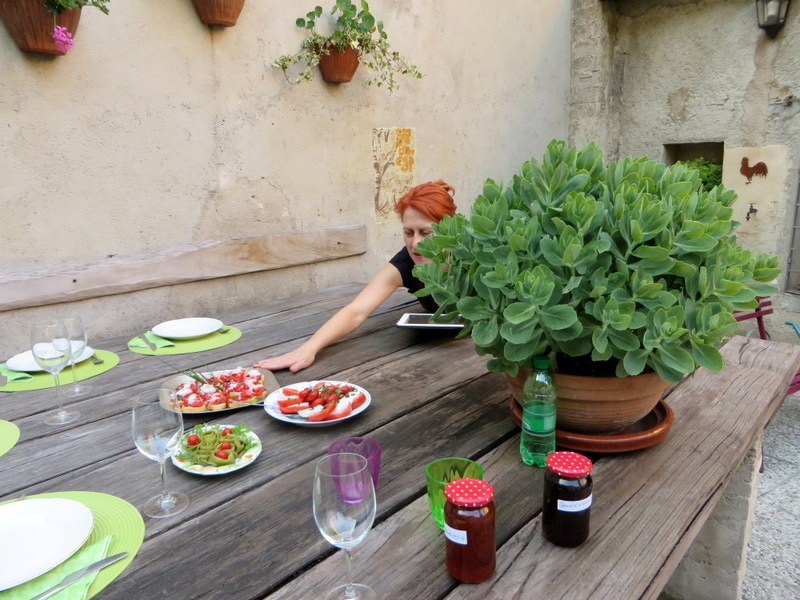 I am lulled into a delicious stupor listening to the sound of this seductive language, on top of the wine and wonderful repast, that finished with fresh melon and liqueur with the unsurpassed Italian coffee of course.

After three days in this fashion I had finally achieved a small piece of fresco, a copy of a fragment of the Roman garden paintings  when they came to the British Museum last year. 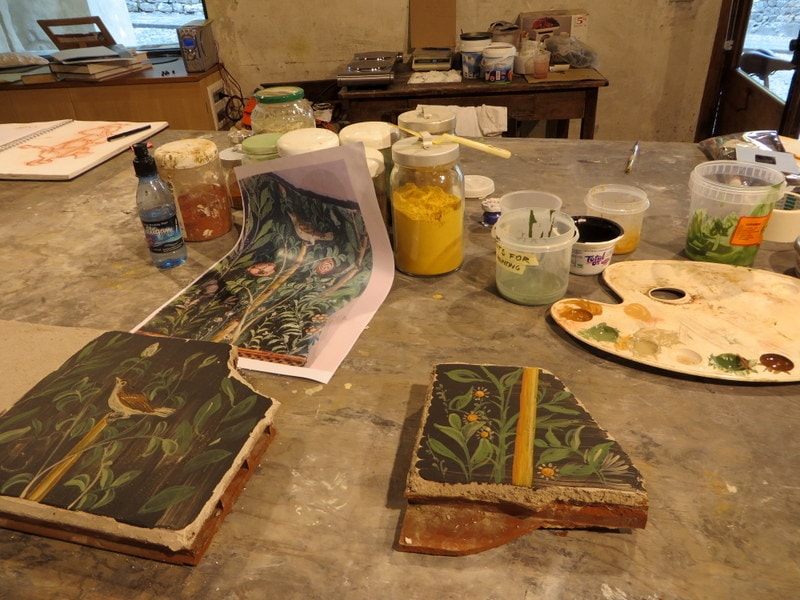 On my return to Blighty I found the piece a little smeared. But in my mind and soul I feel I have something with the substance and clarity of Gothic architecture’ made of stone, plaster and cool shadows and light, with the graceful figures of the Renaissance artisans moving amongst arches. In their hands they hold brushes and glasses of wine. It is a calming and civilising vision. 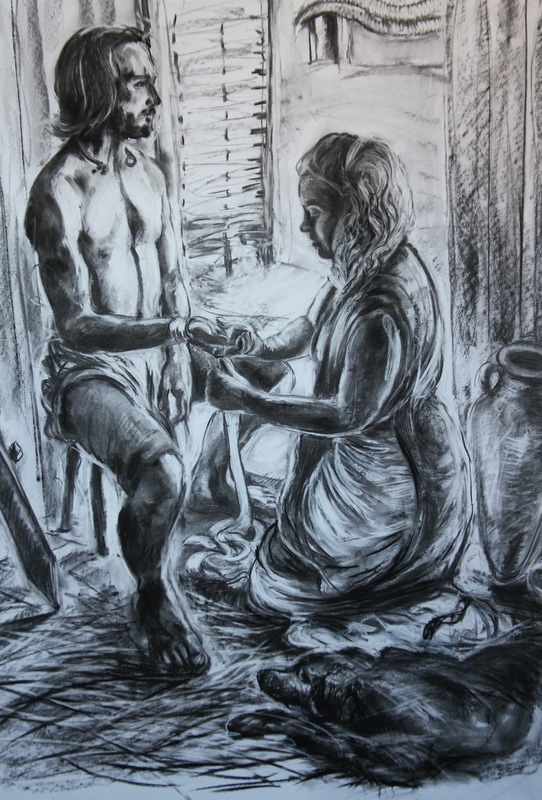 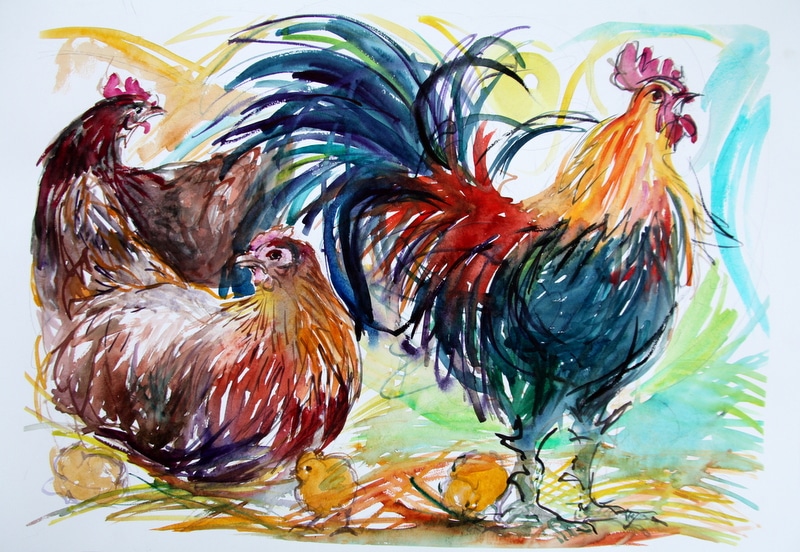 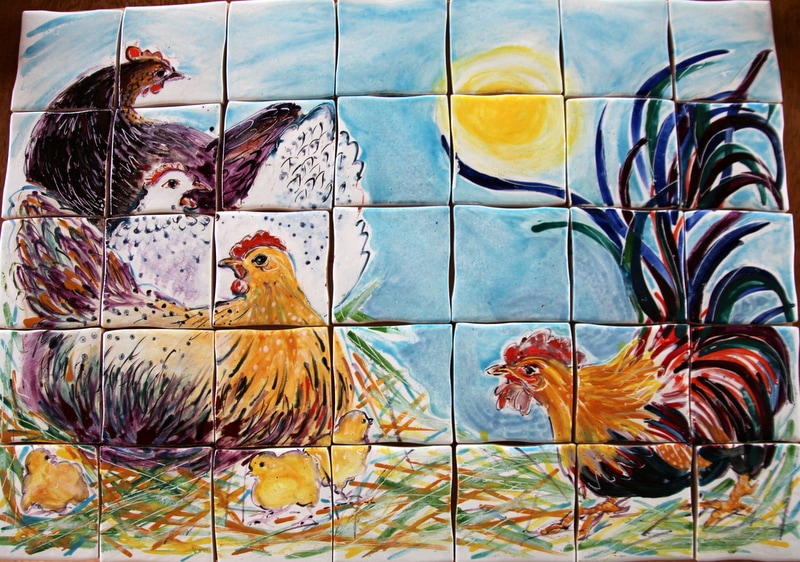 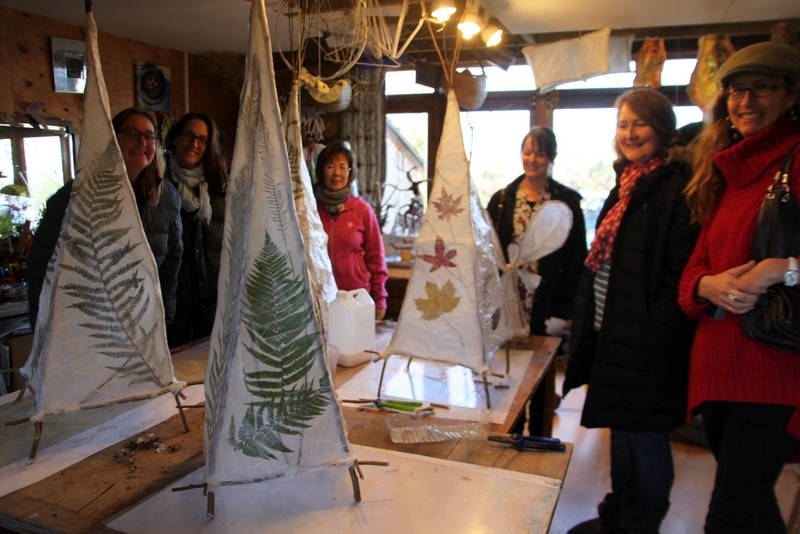 Christmas Lantern making with the Friends from Haslemere 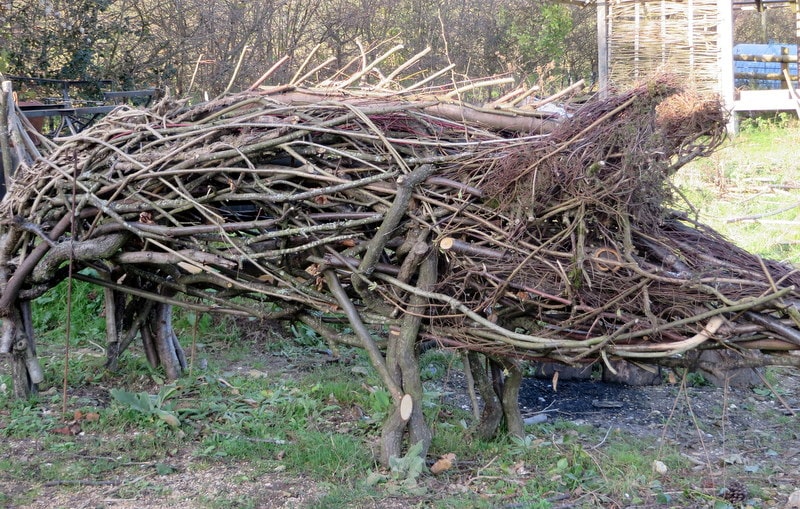 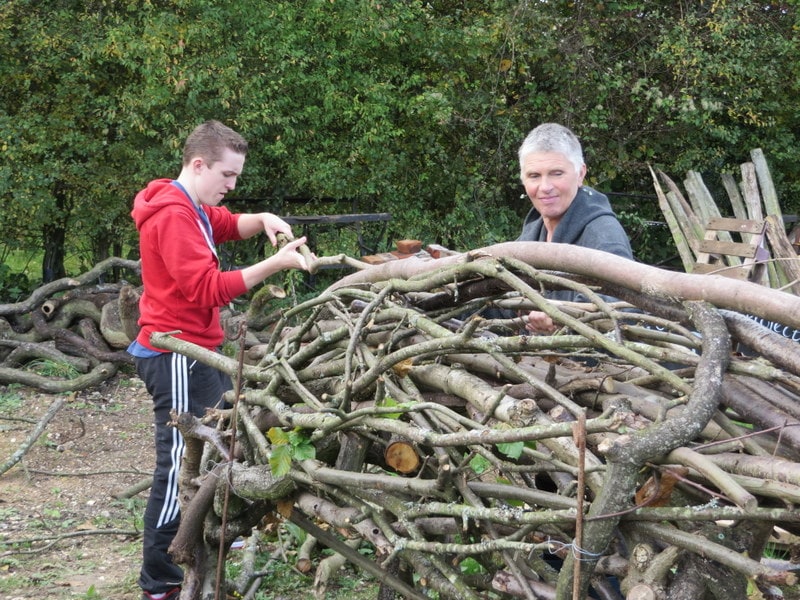 Danny helping to put the Boar together 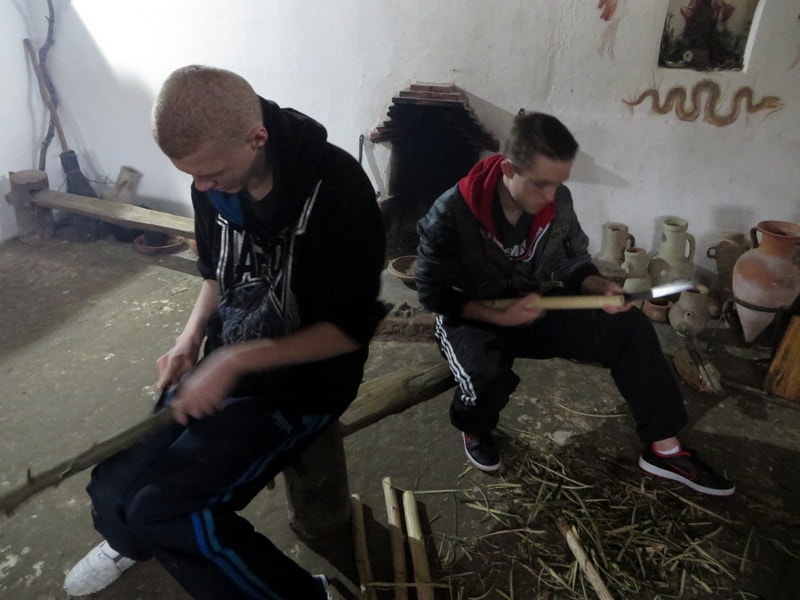 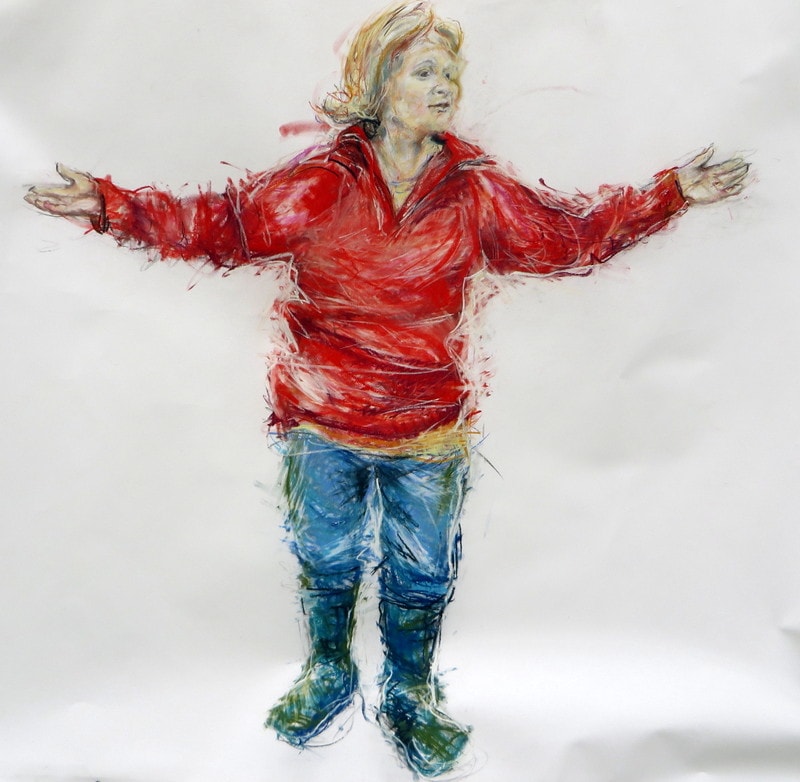 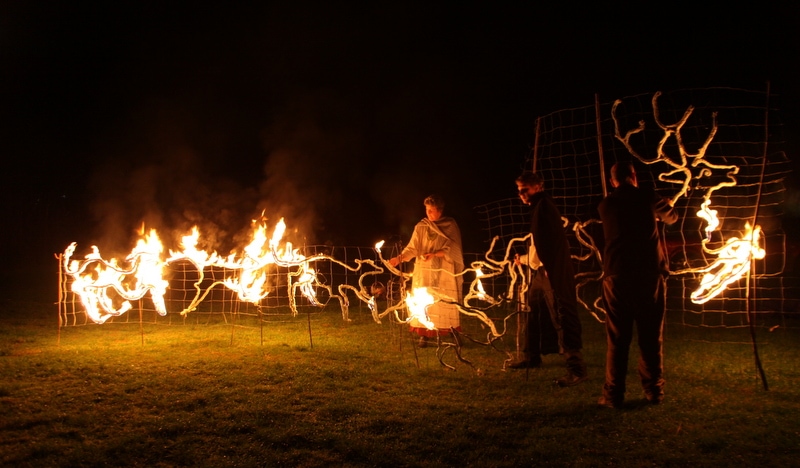